Send us a Message
Donate Now
Menu
| No Comments 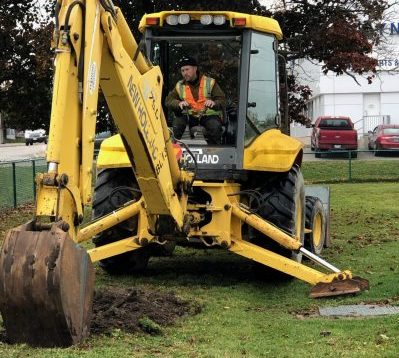 On October 16, 2020, Canopy Project Kawartha Lakes put its first trees in the ground!  13 trees were planted at the Boys and Girls Clubs of Kawartha Lakes (now known as BGC Kawarthas) property at 107 Lindsay Street South.  A group of CPKL volunteers and BGC staff were supported by John Bush, Co-President of Environmental Action Bobcaygeon and Fleming College.  Topsoil was donated by Emerald Green Property Services and mulch by Fleming.

Each of the trees is dedicated to an individual in our community.  The native trees that were planted include Autumn Blaze Maple, Ornamental Pear, Bur Oak, White Spruce and Serbian Spruce.  The species were chosen based on a variety of factors including soils, salt tolerance and species diversity.

The first planting day was a terrific success – the group hopes to replicate this many times over as it continues to improve the tree canopy in Kawartha Lakes.  The next planting will take place in the first week of November on the west side of the Club property.